This world of ours is, and always has been, full of great thinkers, visionaries, who in most cases do not receive praise in their life, because their innovations go far ahead of their time. Visionaries are those who reach deep into the essence of the connection of all creation. In fact, an ability to see the outside world and connect it with the inner sense of a unique form, which recognizes the meaning of what was created.

Visionaries follow their visions, endowing the World with a wealth of their insights and inventions, which shines and can be understood over time. One such visionary was Michael Persinger.

Who was Michael Persinger – biography

Michael Persinger was born on June 26, 1945, in Jacksonville, Florida, USA. Michael Persinger was an American-Canadian professor of psychology who conducted experiments with the goal of discovering the connection between consciousness and physical phenomena, such as geomagnetic activity.

He was especially recognized for the invention of the “God’s helmet”, a device that he claimed could induce paranormal experiences in the user, using a weak magnetic field. Persinger’s experimental work on paranormal experiences gained wide media coverage, with which criticism came along. He also constructed a device that emits an electromagnetic field of 7.83Hz. This device was taken to the International Space Station and helped the astronauts to regain the previously lost bone mass.

Scientist Michael Persinger began his academic career at Laurentian University in 1971, starting as an assistant professor of psychology. In 1975, he was promoted to associate professor, and in 1980 he became a full-time professor.

A few years later, he founded a behavioral neuroscience program at Laurentian University, an interdisciplinary unit that included experts in psychology, chemistry, and biology. Michael Persinger was a scientist, who was understood only by a handful of people. 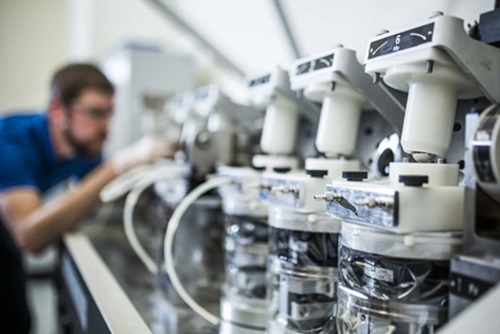 When it comes to Michael Persinger, his research biography is rich. Magnetic fields, a major element of Persinger’s research, included the influence of magnetic fields on living processes. One study was the effect of exposure to a specific electromagnetic field (sampled spatially and temporally) on mice injected with melanoma. Compared with mice that received false treatment (where no real magnetic field was applied), the experimental mice did not show tumor growth after 38 days, while the control mice showed large tumors.

In other research, Michael Persinger has exposed young people to weak configurations of magnetic fields or false fields in which no real magnetic field is generated. As in the study in mice, the fields were spatially and temporally processed and focused on the temporoparietal lobes, an area of ​​the brain associated with mood. Mood states were measured before and after each session.

Professor Michael Persinger proved that the application of these samples of magnetic fields improves the mood compared to the false field.

Scientist Michael Persinger dealt with the interaction between the geophysical environment, especially magnetic fields, and the structure and activity of the human brain. It explores the possibility that emotions and experiences can be evoked by applying magnetic fields to the brain compared to external explanations of the alleged experiences of Gods and other non-physical beings.

For example, research participants wearing specially equipped helmets – “God’s helmet”, which subject them to low-intensity electromagnetic waves, reported on Angels and other phenomena. Persinger says the research is not intended to “remove one’s religious/mystical experience, but instead to determine which parts of the brain or its electromagnetic patterns generate the experience.”

The scientist Michael Persinger has published hundreds of peer-reviewed papers and has regularly participated in national and international television and radio shows, discussing topics such as unusual experiences, climate change, and religious experiences. In addition to his main scientific activity, he was engaged in less conventional work in parapsychology.

Professor Michael Persinger was respected and supported by a large number of his students.

Who Michael Persinger is, is clearly shown by his research and works, to which he dedicated his entire life and enriched the human race. Michael Persinger has published over two hundred academic articles and written, or edited, seven books:

We owe a great deal of gratitude to this hard-working visionary because he brought us closer to the many knowledge that is used today for the benefit of people. His contribution to the design of the apparatus, which emits an electromagnetic field of 7.83Hz, serves to help regain natural balance in mind and body, which is man’s greatest asset.