Cosmos (Greek: Κόσμος – world, universe) is a term that originally signified order, beauty, harmony. Due to the harmony of the world, Pythagoras transferred this name to be used for the world in general, and in this sense it was also used by the Greek philosophers. In the Middle Ages, alchemists considered man to be a small world, a microcosm, and the outside world- a large, macrocosm.

When I became an internist and gastroenterologist, I had no idea that my future specialization in gastroenterology would become an abstract synonym for what had always interested me, and for what I had a hard time finding answers to, and that would be to find out where exactly is that invisible boundary where the inner world of man connects with the environment. Some might say that it is the skin, which represents the human protective layer against all the negative physical influences of the external environment.

Some might think of the respiratory tract, because through it we breathe in the outside air and get the much-needed oxygen that our body needs for various types of metabolic processes, including the most important one – oxidation, which takes place in it. The eye, such a small organ with incredible properties that conjures up all the beauty of the world around us. And what about consciousness, the brain, and all those psychic and mental events that intertwine between the outside world and our cerebral gyri.

All in all, man represents the central point, a human being as the most perfect figure of the Universe known to us so far.

This invisible, and yet very dynamic, physical-anatomical border of the human microcosm and the outer macrocosm is represented by the mucous membranes of the respiratory and digestive tract.

If we combine this with the skin, the real physical armor of our body, which is far from being inert and lazy, and then the brain with all its unimagined potentials that harmonizes our emotional and sensory world with the environment, we get a man, who is so small compared to the Universe (which is by definition the infinite space that surrounds us), and yet so great for us in our world of the microcosm.

So let’s all, together, embark on an interesting journey of exploring the micro and macro worlds, at the center of which is man, as a human being.

I am neither well equipped nor mentally prepared for the journey into the unknown, and yet unexpectedly I can picture a man floating calmly on the surface of the sea, staring at the sky and the surroundings. Beneath him is the micro world, the blue sea, unexplored to a large extent with all the beauty of the flora and the fauna and the interesting world of microorganisms that it provides. If we dive in, we don’t know which way to go, where to start researching.The view of the beautiful landscape on the coast immediately reminds us of all the riches of nature that our planet Earth has given us.

A look into the beautiful, endless blue sky tosses us into the world of the macrocosm, in which we are so small, and which we would like to find out so much about. Will we ever find the answers to all the questions that interest us, and there are so many of them? 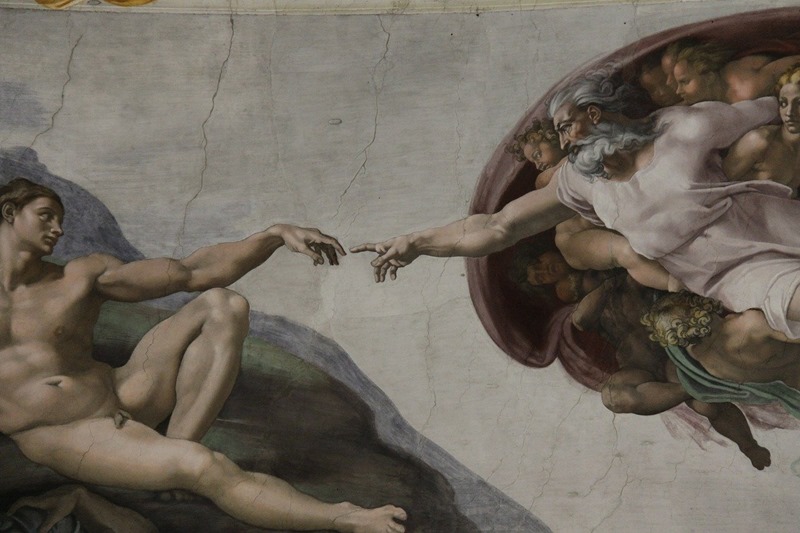 The Creation of Adam (Italian: Creazione di Adamo), Michaelangelo Buonaroti; part of the vault of the Sistine Chapel

Suddenly the wind began to blow harder, the water became agitated and the dance of restless waves became more and more lively, and the strikes of the waves onto the fairytale rocks at the end of the sandy beach became stronger. The sky was covered with dark clouds, the drizzling rain that came down from them merged with the drops of salt water that covered my body.

Lightning began to flash in the sky, and the roaring sound of sparks radiating in the turbulent sky overlapped with the silent flight of the sea gulls. Everything around me had changed, from that wonderful calm sunny afternoon, nature played with us for a moment, filling us with a dose of adrenaline with which we will more easily enjoy the current scenes. Does nature just want to present its existence in a different light, to show us all the splendor of its current beautiful transformation that will enchant us, or does it just want to warn us that by doing and working only for our own enjoyment, we also influence its beauty and the serenity given to it by the Universe, that’s left for us to judge.

We are sure of one thing, no matter how beautiful that transformation of nature was, and no matter how long we wanted to enjoy it, the amount of adrenaline that nature gave us was limited. As we slowly realize that the wind is getting stronger, the waves are getting higher, the lightning is getting louder, and the blows of restless waves on the surrounding rocks are more and more destructive, the desire to return to the previous state of balance permeates our thoughts. It is this state that makes us so calm, it allows us to enjoy all the beauties of nature around us, letting our thoughts explore, unhindered, the secrets of the micro and macrocosm we are surrounded by.

From such a state, we will again readily wait for the mysterious sounds of nature to be transformed into agitato symphonies (agitato – full of excitement; Italian) that leave us breathless.

So that our mind and body are constantly in balance.

To always be ready for new research of the micro and macrocosm.

Let’s turn primarily to ourselves and work on ourselves.

We have Lucha T8, our guide to our own body and thoughts, the transmitter of positive impulses, our way to finding a community of people with a different system of evaluation and attitude towards life and nature.

So now, let’s all start exploring the infinite depths of the micro and macrocosm that surrounds us, putting us – man, at least for a moment, at the starting position in the center of our small world. As we move, slowly but surely, towards both the micro and the macro world, we will become smaller and smaller, knowing that each skipped step will mean that we are close to our path of self-realization. And we should not worry that our human-like figure will become smaller and smaller in the dimension of space.

The smaller and tinier we are on our way to the micro and macrocosm, the more we have moved away from the initial starting position. But it also means that we become more aware, we have learned more, we are more enlightened, more sublime on that path of knowledge.

Like when we conquer a mountain peak, throw the rope to the one below you so they can catch up with you, together you will reach the goal more easily. Just like you would expect the one above you to throw the rope to you. The top of the mountain is not in sight, the peak is still in the fog, and maybe only the sky is its limit. But no matter what, with every meter of the distance you have covered, your satisfaction with your own success will be greater, and the view of yourself and the world around you will be much more beautiful.

So go ahead, because for all of us this is just one moment between 2 eternities anyway.

ON THE WAVES OF LIFE

Sailboat on the horizon

anchored boat on the pontoon,

oh, how beautiful it is to sail

A swimmer in the distance

the impact of restless waves on a nearby rock,

oh, how beautiful it is to swim

on the waves of life.A miraculous flight of a white seagull

on the border of the blue sea and the sky,

oh, how beautiful it is to fly

A couple in love on the beach

oh, how beautiful it is to love

And there is much more I could say

so that they can judge my happiness,

but I’m sure of one thing:

oh, how beautiful it is to live

Effect of Lucha T8 on the human nervous system

Fundamentals of the scientific approach to stress